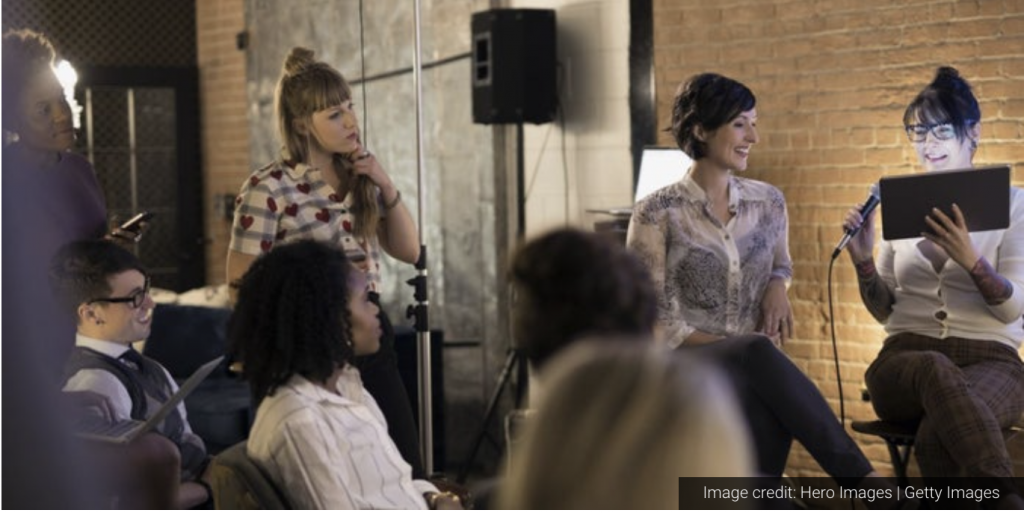 I remember how embarrassed I felt the first time I realized that all my heroes were male: Gandhi, Martin Luther King Jr., Abraham Lincoln, King Sejong, Antoine de Saint-Exupery and even Harry Potter. I still admire all of them, but I realized my lack of female heroes and entrepreneurs was skewing the way I thought about my future without even realizing it. Especially onstage.

Representation onstage matters because impact does not end on stage.

As an Asian American female entrepreneur and speaker, I think more about the unconscious biases and lack of diversity present on the stages I and my fellow female speakers stand. I’m aware that I’m often one of the few speakers who is a female, Asian American and/or a millennial. In fact, someone always comes up to me saying that this is the first time she heard a message that really resonated with and inspired her from someone who looks like her.

Despite increased awareness of the importance of diversity and inclusion, most conference speakers are male. Some conferences have zero diversity in gender, age and ethnicity. Furthermore, even when there are female speakers, too many are not offered opportunities suitable to their experience. Female speakers are often brought on as a moderator, MC or as a panelist during an overly crowded session. No matter what their expertise is, I often see more females and minorities leading diversity sessions instead of speaking on their industry expertise. One of the worst things is when you can clearly see them being positioned as the diversity token, such as having a highly influential female VC as an MC instead of a judge or expert in a pitch competition in San Francisco. Yes, that happened in 2017.

When I organize events, I have learned how oddly challenging it is to bring together diverse representation onstage. When arranged community events in innovation and entrepreneurship, I noticed how it took me twice the effort and time to find great female speakers. This was due to multiple reasons:

I am not alone in the struggle to find diverse speakers. Some event organizers say very few speaker submissions are by females, and many argue they do not know great female speakers they would want to bring in.

I want to share this to acknowledge that if we really want to change the overly male-dominated speaker circuit, we have to be aware of the holistic challenges in the industry. Change is not going to happen if we do not understand why people like to stay with the status quo and what could encourage them to think and do things differently. To incentivize change, there needs to be a “why” that is relatable and a “how” that is easily implementable. If people think building a diverse speaker list is more challenging, because there aren’t enough good female speakers or because so few apply to speak, we will continue to delay working on the tough challenge.

Here are some easy ways you can rethink diversity in speakers and shift the status quo:

If you have never realized the lack of diversity in speakers to be a problem before, determine how it relates back to your personal life. If you are a parent, do you view your sons as better natural born speakers than your daughters? As a manager, are you implying that your female colleagues are less articulate than your male colleagues? Are all your role models and favorite leaders men?

Once you are aware of the gender divide in speakers, set specific guidelines and rules that can help, such as a 50/50 policy for male and female speakers and an equal payment for every speaker policy. You can try different things to see what works well for your organization, but setting guidelines and rules increases commitment and accountability.

How you advertise matters.

Think about where and how you are advertising for speakers. If your call for speakers is just distributed to predominantly male groups, female speakers might be unaware of the opportunity because you are not advertising where they are! It’s OK for you to not know where to find every female speaker, but you should at least know a few organizations and individuals that can help get the word out. Identify and build relationships with at least two or more local organizations that can help share the opportunity with diverse groups.

If your prior event photos are all mostly one demographic, it can negatively affect the chances of someone from a different demographic applying. Take another look at your marketing visuals and messages to see if you are being inclusive and thoughtful.

Show up to where they are.

Like all things, you have to start building relationships early on with the diverse communities you want to work with. Make the time to show up to at least one event a quarter, for instance, or get coffee with someone to learn more about their perspectives on where to find diverse speakers. Respect them as allies and allow them to share critical feedback and hold you accountable if you forget to notice the diversity gap. Knowing that you have someone you can openly ask questions to without being judged or seen as being defensive is super helpful. Often if you know at least one female speaker, she will likely have many recommendations for you. The more you know your targeted diverse community, the easier it will be to find more diverse speakers.

There are many more “how-tos,” but these four core approaches are essential and can play a key role in shifting the way individuals think of diverse speakers.

Having a lack of diversity on any stage -- event, entertainment and press -- is a problem because it becomes our unconscious bar of what is considered normal. Just like how I grew up feeling a bit perplexed about my male role models, the unspoken message you communicate as an event organizer is huge.

Today I can give you a long list of leaders and entrepreneurs I admire who happen to be female or Asian. Jack Ma, Sheryl Sandberg, Oprah Winfrey, Ming-Na Wen and Elizabeth Gilbert are just a few of the individuals who remind me that my gender and color should not be the barrier to what I can do and who I become. I hope I can be that reminder for others as I take the stage as a speaker, entrepreneur and a professor who happens to be an Asian female.

Representation onstage matters because impact does not end onstage. That’s where it starts.

If we work together, we can make lasting change for diverse representation everywhere.